Can the highest price ever be the best price to submit?

In my 1st blog/article I wrote about pricing – the ongoing question around whether it is, indeed an “Art” or a “Science”…Perhaps, we conclude, I think, a little of both.

There is certainly, to me , a kind of alchemy and magic in numbers – though I admit the first time I realized I could truly make one set of data give about 50 different statistical outcomes dependent upon which criteria I used a little part of me felt truly sad – it was like taking the red pill in the matrix and forever after realizing all reports saying “x % of y” can pretty much be made to say whatever the owners of the data want or need it to say or prove.

That’s certainly not been a good thing to know when seeing a plethora of COVID statistics I can tell you!

We also touched on the question of VALUE versus PRICE.

In this post I’d like to raise my opinion that you absolutely do NOT have to be the cheapest bidder to win.

Nor in many cases should you want to be.

In fact, my favourite personal challenge when bid pricing was to find a way to – controversial this may be, but – submit the highest price and win!

Now hear me out before you conclude I have been drinking the proverbial Kool-Aid – there is a science to this opinion, and it did work!

So, what do I mean by this position, and what drove me to this conclusion?

Well, a few things, and we shall visit & discuss them here:

If you have cultivated those relationships before the bid is even issued you know what their unstated key drivers are – and your bid can meet, and hopefully exceed, these key criteria. They will very likely happily pay that little bit extra for the peace of mind of having both their stated AND their implied needs so convincingly catered for.

If you are able to evidence that you have delivered, for example, a “25% saving in year 1 and a subsequent 5% additional saving for years 2 and 3 of the contract”, particularly for similar organisations within the same industry, then this proof can encourage a decision-maker to accept an initially higher bid – safe in the knowledge that actually over the whole proposal life-cycle you will save them more. Which brings us nicely too…

One thing, as procurement professionals become increasingly savvy, with growing qualifications and skills/training available year on year, that has changed enormously in the last decade is the way buying decisions are made. There has been a huge shift away from the “just make me look good so I can tell my boss I can save him X%” attitudes of old. Smart procurement execs now know that if something looks too good to be true, it probably is – so offering a higher price but fixing it for the length of the contract; or a higher price with great rebate incentives for growth in additional category spends, and many other examples I am sure – can really add to trust, transparency and increased openness during negotiation; which can only build greater stronger relationships for this bid and future opportunities as well.

Now this one is my personal favourite…

One of THE most under-rated skills, in my decade of experience in tender pricing, was the ability of the pricing exec to think strategically.

It’s not enough to “just” price a piece of business to win – your role is to think “what will the other pricing execs be doing”…It’s not something I have heard others openly discuss but I am quite sure that at board or executive level these talks openly take place all the time – for example “but how are we going to differentiate ourselves on this one”.

Well I say that is part of our role too.

My favourite example of this was one of my proudest bid wins.

We were pricing a multi-million-pound 3-year contract and I wanted to ensure we did something to make us stand out.

Price was going to be tight and given that this  was a government submission it was likely that price would, no matter what extra value we could add, ultimately be the key driver as the decision-makers there were pushed hard to meet key cost-reduction targets.

Number 1 being “We believe our bid of £x million will be in line with our competitors, however your submission left an opening for us to make these 5 assumptions that we will change your service level in years 2 and 3 to make this pricing sustainable. If this is not the case then the true price of this bid should actually be £x+y million”. We followed this with detailed evidence of how we had built the CTS (Cost To Serve) model in each case. Total up-front transparency – making us the obvious trusted partner from the start.

Number 2 was a further bid £ value, given that we had some insider knowledge that they also had strict environmental criteria and targets to hit as well over this bid period, that said “We can also help you meet 2 of these upcoming goals. The additional cost here would be £x+y+z million…we’d love to discuss this with you further and see if the added cost might prove of wider value and could perhaps there be something where we could work with you in a transparent way to deliver these additional changes over the contract”.

I know it may be a little controversial to say we kind of operated a little outside of the lines here but for me this is innovation, creativity, blue-sky out-of-the-box, you-name-it thinking in it’s purest sense – and they do say the only constant is change.

We all know the traditional thoughts behind the price/demand curve… 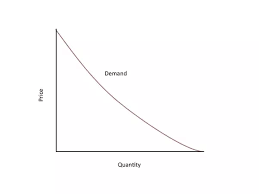 …however by offering this additional insight we not only won the business, but we were actually able to increase their spend year on year for the length of the contract in a transparent way that benefitted both parties.

The additional work involved in these 2 small added appendices was about 2 weeks for me of overtime and additional hours, on a bid with a 6 week turnaround, so it did take that real desire to win; to offer something perhaps others hadn’t thought to include; and maybe just a dash of it being that I was quite new to bidding and wanting to make my mark.

However, as I mentioned in my 1st musings, this did mean that again I HAD to be involved in all stages of the bid. I actively had to get Directors and Senior Stakeholders to buy into this idea of additional work. I had to sell in my ideas and show clear business value from them.

I guess the main thing I take away from this is passion.

If you’re not truly passionate about your role you’ll be happy to merely meet a bid requirement.

Passion is when you want to exceed it, to find a way to offer something the bidding organization didn’t even know they wanted yet – to offer so much more than is asked for; and ensure your organization not only wins the business but also has the chance to use the tendered-for period of collaboration to build a lasting, sustainable, and mutually beneficial, relationship.

Perhaps that’s our next topic for pondering…

…or perhaps I just always like to be different…

Either way I shall leave with this rather apt. quote:

“Swim upstream. Go the other way. Ignore the conventional wisdom”.