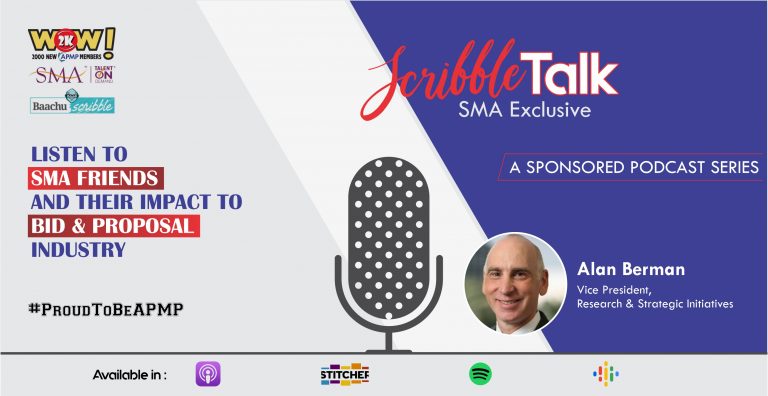 Part of 18-24 May 2020, mental health week kindness theme, I shared my kindness stories

SMA is pleased to sponsor Scribble Talk. As one of the top Apple podcasts it delivers valuable knowledge to bid and proposal professionals world-wide. It’s a great source for mentoring and career development, and each episode is so much fun! SMA has been the global leader in capture and proposal services for 38 years.

Scribble Talk SMA Exclusive is our first ever sponsored weekly show produced by Baachu Scribble and hosted by Ashley Kayes and Baskar Sundaram.

I dedicate Scribble Talk SMA Exclusive to these veterans and to their clients.

Listen in and get to know them personally… 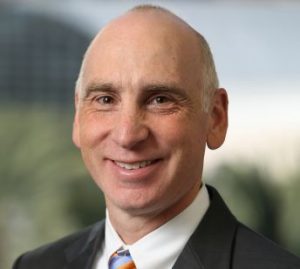 Alan Berman is Vice President for Research and Strategic Initiatives at SMA, Inc. He specializes in market analysis, strategy development, and new business creation. He focuses on growing the SMA business through new systems and processes to enable rapid scaling in core and adjacent markets. Alan also leads the SMA Research team, which conducts analysis on government contractors, major programs, and government agencies, to support business development and client engagement teams. Prior to SMA, Alan spent 11 years in strategy consulting at Monitor Group and Deloitte Consulting, focused on growth strategy and innovation. In that role, he led engagements with clients that included senior leaders of Fortune 500 companies, emerging technology-based firms, and the Department of Defense. These engagements tackled thorny challenges with multi-billion dollar implications. The projects spanned the aerospace & defense, healthcare, automotive, and consumer electronics industries.

Prior to consulting, Alan was at Zone Reactor, a technology incubator funded by the Draper Fisher Jurvetson venture capital network, where he served as Entrepreneur in Residence. Projects centered on technology commercialization of government-funded R&D and resulted in commercial application of over a dozen patents.

Prior to Zone Reactor, Alan worked as a hard drive and tape drive development engineer and tribologist at Seagate Technology. Alan received his Bachelors and Doctorate degrees in Chemical Engineering from UCLA and UC Santa Barbara, respectively, and earned an MBA from the Anderson School at UCLA.

In this episode we will discuss Alan’s

Get to know the human side of your multi talented strategic leader SMA Inc, Alan Breman

Since 1982, SMA has been the global leader helping companies be more competitive from market entry, to winning business, to profitable operations. Clients hire us for the expertise and experience of our world-class talent, and the operational strength and insights we bring from 38 years of corporate experience across many industry segments and markets.

SMA’s Talent On Demand (TOD®) digitally enables the professional services activity chain from talent sourcing and project resourcing to delivery. TOD® enables you to capture relevant information to describe the capabilities and past performance of your talent, and ensure they have the right professional characteristics for each required role. For each project, TOD® ensures you:

SMA ASSESSMENTS: TEST YOUR PRODUCTS AND PROCESSES AGAINST BEST PRACTICE

SMA  provide a range of free, online assessments for you to assess your internal capabilities against best practices: 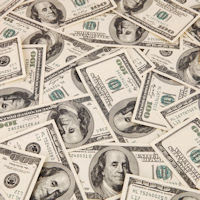 CA/PTW Assessment: Start the Journey to Improve Your Internal Processes 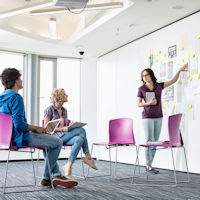 Proposal Assessment: Are You Ready for Your Next Review?

Did you use best practices promoted by the Association of Proposal Management Professionals (APMP) to develop your current proposal? Take our free Proposal Assessment to find out before that next review! 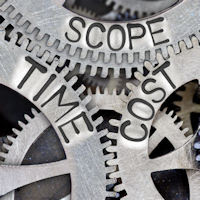 EVMS Assessment: How Does Your Implementation Score Against Best Practices?

How do your Earned Value Management System (EVMS) implementation and practice score against EIA-748? Take our free online EVMS Assessment and find out!

Find out more about SMA Assessments

Leave a comment, Subscribe and leave a review in Apple Podcast or Spotify, send an email of proof to baskar@baachu.com to be entered in a chance of winning Baachu Scribble suit of courses and certifications.

Thank you for listening 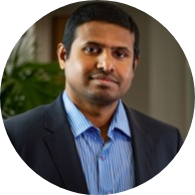